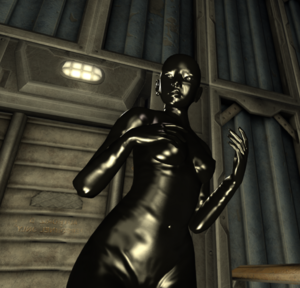 IDENTIFICATION: Veladerma are simple microbial colonies that subsist on organic debris (With a particular preference for skin cells.) In the wild they often appear strikingly similar to slime molds, but often grow to sizes that would be impractical for a smile mold to maintain and form thick blankets of fleshy material. Unlike slime molds however; Veladerma are far from sedentary in this phase, and may lurch or jump with bursts of movement which they often use to intercept potential hosts.

In their phoretic parasite form they are mostly dormant, but may ooze out of their host. The affected organism is sealed into a latex membrane formed by the room-temperature vulcanization of the parasite’s rubbery flesh. Host subjects may attempt to approach uninfected individuals, displaying extroverted social behaviors, poor inhibition control, and enhanced libido which may manifest regardless of how much of the host’s body is currently ████ ████████.

To the best of our knowledge Veladerm physa is not sentient, so dissolving it in chemical showers should not pose an ethical problem.; However, under the effects of the infection some hosts may feel traumatized by the loss of their parasite. Preferably, hosts that have been compromised may be introduced to suitable Latexphera enclosures while they wait for the parasite to detach of its own volition. Under no circumstances should visitation be conducted without full body hazmat protection.

Furthermore, personnel should not attempt to detach the parasite with a sharp object. Not only does the colony spread partway down into the orifices of its host; but the suit is cemented to the skin with protein bonds that make removing it without damage to the skin virtually impossible without chemical showers, and the composite of rubber polymers and proteins within in the tissues offer far more resistance to abrasions than the comparably delicate human flesh underneath.

Infected personnel are kept in a state of sexual frustration to promote the production of bodily fluids for ease of transmission. When the parasite desires to propagate itself, it will stimulate the host to ███████. Infected fluids appear thick and often opaque with the cells of the colonial parasite, and possess some limited mobility to move, jump, and engulf potential hosts. After a period of 6-12 months the parasite enters a phase of heightened activity where the host is subject to constant ███████████ with pseudopod ███████████ in their ██████ ████████ ███ ███████████████ until releasing their exhausted host. After this point, the hosts may be reexamined for traces of the parasite and  potentially moved into a waiting cell under low security & quarantine until release. Subjects may be provided non-living latex garments to mitigate separation anxiety.

Keeping infected hosts in Latexphera enclosures is generally considered safe, however a lack of predation and an overabundance of food sources can lead to the Veladerm physa overpopulating their enclosures and merging into supercolonies of multiple engulfed hosts. Supercolonies do not appear to release host subjects, and may milk them indefinitely.

Enclosures with Veladerma are advised to contain predatory Latexphera organisms to control their population, and Homoanalogia to serve as host species. For this purpose, Cereuform Sapioamora ticks multiple checkboxes, and they often form robust ecosystems together in captivity.

Like most organisms under the Latexphera classification, their biochemistry is completely indigestible for most carbon based organisms. Releasing them into the wild would cause immediate habitat destruction, and that’s not to mention the effects that it could have on society and culture as the infection spreads through the population. Even in relatively small sample sizes, the infection spreads incredibly quickly, and the development of unchecked supercolonies could leave population centers enslaved to the alien parasite.

Advocates for the release of Veladerm physa must immediately undergo both psychological and physical examination to determine whether they have been compromised by the parasite.