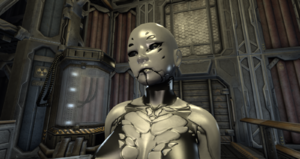 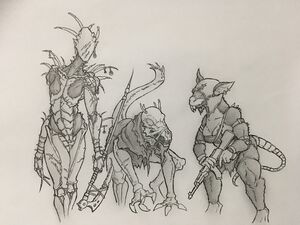 Mature Cereuforma may appear deceptively human, highly sociable, playful, intelligent, and often affectionate with a grasp on human interaction that may appear uncanny. Their rubbery cold blooded bodies appear decorated in pale shells with striking black flesh between the plates. Their body shape plays no role in identification however, as their phenotypic ████ mimicry can cause their body plans to vary wildly. As larvae however, their bodies are dominated by rubbery black flesh. Their 16 hexagonal body segments give them an almost caterpillar-like appearance that can reach up to half a meter before ████ ██████ pupation.

While their reputation of mischief and unruly behavior precedes them, the actual risk they pose is ultimately minimal. Mature Cereuforma display human-like intelligence, with keen problem solving skills and endless curiosity for other lifeforms. Handlers are advised to be aware of their “Glistening” behavior where their rubber exoskeleton appears to polish itself. Glistening appears to draw the attention of neighboring Cereuforma, and it appears to be tied both to courtship behavior and pack hunting. In cognitive tests they appear highly attentive (only blinking when humanoids are watching them) and they generally acquire complex languages and skills faster than the average human, but quickly forget subjects that they aren’t paying close attention to. Containment of Cereuform specimens has proven problematic with specimens gleefully overpopulating habitats, cracking door codes, and █████ security measures. Escaped Cereuforma have been found sneaking into neighboring enclosures, following staff members back to their quarters, and attempting to break into ██████████ █████ containing information on █████ ██ ███████ ████.

Cereuforma are carbon based invertebrate-like life forms, with unique mutli-nucleuated cellular anatomy that hasn’t been observed in any known phyla. Like other species classed in “Latexphera,” Their naturally occurring rubber elastomers are highly durable, but certain █████ ██████ chemical showers (chiefly limonene, which they use as a digestive enzyme) may cause severe acid burns. DNA stored within their cell nuclei appear to match specific hominids that have interacted with the Cereuform ancestors in the past, but no native DNA or equivalent information storing mechanism has yet been identified in their own cells. The likelihood that they use any system similar to DNA is approximately 1 in 50 million. The hypothesized explanations have ranged from shadow biospheres to alien body snatchers with little evidence to back up their claims. Whether they can even be considered a species or not is hotly debated, but when they are ready to “mate” they ██████ their cloacal ███ ███████ with a preference for hominid partners over their own kind.

Specimens may have a preference for hominids because the complex languages and behaviors intrigue their “glistening” response, but non-communicative ███████ drones may still be targeted by their sexual advances. Regardless of reproductive success, Cereuforma always give birth to fertile young. Occasionally, unsuccessful specimens may substitute hominid ███ samples with pieces of DNA from their food to vary their offspring, but more often than not they will essentially clone themselves with a process comparable to ████████████. Clutch size can range between 10-20 eggs at a time, 4-6 times a year. The larval state in their lifecycle is thankfully relatively slow, lasting upwards of 30-34 years in some cases while the larvae quietly observe their environment. When they are ready to pupate the outer layer of their skin distends in a process of ███████████ to form a sedentary autotrophic cocoon-like organism that leaches nutrients from its environment through feeding tendrils until it has reached its full size in 2-4 years. Inside, the internal organs and elastomer nervous system are free-floating in oxygen rich polymer until their adult body forms around them. Their maximum lifespan is unknown.

Under no circumstances should personnel approach developing cocoons.

While their natural environment is yet undiscovered, captive cereuforma first began appearing in human populations in ███ through the xenophile market. Their enclosures often contained crude heat lamps, and their diets often consisted of human food scraps mixed with supplements of rubber trash. The healthiest specimens recovered were █████ in hot, humid, equatorial environments, with access to freshwater and sunlight. ███████ enclosures may experiment with tropical rainforests, marshlands, and hot springs; but must include at least 1 latex producing autotroph as a food source. Enclosure strata is unrestricted.

Precisely how Cereuform Sapioamora entered into the xenophile market is unclear, as no wild specimens have ever been observed. Apprehended sellers have only rudimentary breeding programs, and active field teams are still searching for the original source.

Recruitment, mass production, and breeding options are being explored. Proposals for voluntary dronification have been met with some resistance, but preliminary experiments on volunteers have found Cereuforma to be highly susceptible to hypnotic suggestion when exposed to glistening pheromones under partial sensory deprivation and sexual stimuli.

In the meantime, specimens with repeated escape attempts may be selected for participation in enclosure, restraint, and entertainment development; given their consent. Their propensity for breaking containment make them ideal at troubleshooting bondage measures for more dangerous species.

Delvers are advised to make their best attempt at DIPLOMACY after the incident of ███ ███████. Information gathered from them is invaluable, and confrontations with them have ended unfavorably. Their infatuation with humanity only goes so far, and our recent blunders have left several hives seemingly disillusioned. Their Trade relationships with our forward bases have faltered, but negotiations are underway to repair the damage. Some xenopological missions have been proposed to document the cultures of hives on the top layers, but little can be gleaned at the moment beyond some hearsay of humanoid idols, timekeeping with biological cues, and the ritualized consumption of rubber gear.

Latexphera enclosures are normally quite hazardous for unprepared Delvers, but they are also prime hunting and foraging grounds for Cereuforma if they are not pushed out by larger more dangerous predators. Their hives may offer safe havens to restock and refuel, but Delvers are still advised to stay in groups. Complacency is unbecoming of an explorer, and there are occasional reports of team members going missing in or around Cereuform hives.

Under no circumstances should Delvers approach developing cocoons.