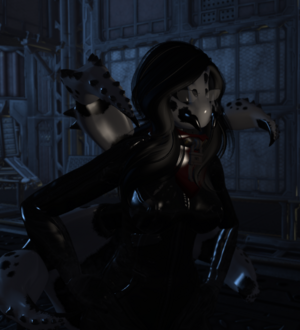 Charlotte resembles a stout 162cm (5'4") hominid spider with additional limbs sprouting from her back, large eyes, chelicerae fangs, a 40cm ovipositor, and a plump abdomen mounted onto the tailbone that's capable of spinning 4 meters of web a minute with an average of 80 meters a day. Her body is capable of compressing to fit into openings as narrow as 25cm x 25cm, but her movement is limited in this state. Specimen is extremely sensitive to the vibrations picked up by her legs, and may attempt to restrain drones, specimens, and facility staff around her to prevent extraneous movement.

Charlotte is required to wear a set of custom restraints when she is outside of her habitat.

-Non-stick mittens and socks: Limiting her ability to climb and deafening her vibration sense.

-Spinneret caps: Preventing her from accessing her web.

-Hood blinder: Blocking vision from behind.

-Muzzle: To keep her chelicerae tucked away without hampering her speech.

-Bell cuffs: Providing attachment points while preventing her from sneaking up on personnel.

-Booklung limiter: lowering her oxygen intake by 0-75% to prevent sudden bursts of movement.

Cereuform sapioamora will generally base their morphological characteristics off of other organisms using store houses of foreign genetic material. Most of the material used comes from Homo sapiens, but trace amounts of other specimens may appear in their storehouses. Specimen PNW-L1-5466(NL) "████████" appears to have attempted parthenogenesis without complete instructions for a hominid body plan. Prior to her pregnancy PNW-L1-5466(NL) exhibited erratic behaviors which were not properly understood at the time of the event. Repeated escape attempts, solicitations for sex, binge eating, stalking. PNW-L1-5466(NL) was taken to a high security isolation ward 1 week prior to giving birth, where an improper seal allowed her to get her hands on one Salticus scenicus; a common jumping spider species endemic to North America. Both the resulting egg clutch and PNW-L1-5466(NL) were returned to habitat ███████, where the 11 resultant offspring would pupate into their current forms. 10 failed to survive, but PNW-L1-5477(NL) "Charlotte" remained for 4 years with no confirmed body. During breach event █████ ███████ she was rediscovered and IDed in access shaft L1:49 near Dr.Gardner's residential wing, where her web played a critical role in preventing the escape of ██████.

Charlotte has proven cooperative and nonviolent to staff personnel, which has earned her an honorary position as an "advisory escapee" for levels 1-2. Her role is to test habitats, restraints, and non-lethal containment procedures for security's sake, and she is permitted to free roam on level 1 when not at work or in her habitat provided that she submits to her restraints.

Charlotte was conscripted by agent Summerfield on DFR-27's █████ ███████ long term field reconnaissance mission. Her assistance has allowed the Delver Union to map large portions of the Level 1 strata, and her actions in the Labrycruxian incursion allowed DFR-27 to escape capture by competing scavengers.

When Charlotte was found living alone in the L1:49 access shaft, reports did not indicate she was found wearing any of her required restraints. When questioned, Charlotte reported to have "lost them."